I was booked for beautiful Italy, the sunny South of the country, to be precise. Great, I thought, what a treat, finally I get away from the clouds and the cold which are our meteorological staple diet in Germany these days. That was the general idea. Implementationwise it didn’t quite (!) work out according to plan.

The day began with me discovering the hard way that the German railway workers went on strike. So I had to take the car to go to Frankfurt Airport. Many other commuters had come to the very same conclusion, and the motorway was crowded. My perceived average speed was 20 km per hour. I have a plane to catch, I can’t be late, I thought, wringing my hands, first in a manner of speaking, then in reality…

However, the Traffic Gods were inclined to me, no real traffic jams, I reached the airport more or less in time, make it through security, find my gate and relax.

The relaxed phase lasted exactly 10 minutes until Alitalia announced a 1,5 hour delay for our flight. I texted the customer immediately, for I had an inkling that we might have trouble catching the connecting flight in Milan. To cut a long story short: our flight was scheduled for 9.45 am, and we had take-off at 1.00 pm. (By the way: according to schedule I would have arrived at the destination airport at 2.40 pm, and basically I could have waited for the strike to end, and would still have been in time for my flight…)

Once we had made it to Milan, we were issued a new boarding pass for the next flight to Southern Italy (departure at 5.00 pm) and a lunch voucher. And we wait. We will make it to the conference location in time to do what we are hired to do: simultaneous interpreting.

At 4.30 pm we checked the display, and noticed the little word “delayed” next to our flight number. I sent what feels like the 20th text to the customer who is still waiting for us… Then the difficult search for an Alitalia official to get confirmation and a time horizon. Yes, the flight will be delayed by 40 minutes, he said, but in reality we had to wait an entire extra hour. Mind you, after 4 hours at Milano Linate I could offer guided tours!

At 7.30, a mere 13 hours after I left my home and family, we finally arrive at our destination. And exactly 20 hours later we flew back on the very same route – this time with no unusual 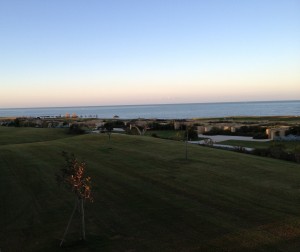 Nice side effect: I was delighted to discover this beautiful view from my hotel room…

By the way, this is not the end of the story – find out what happened next.

Sometimes it feels as if we were drowning in words. The interpreter is, in a way, helpless in the face of an […]

…for I am afraid I damaged you a wee bit today by producing a pile of printouts. Sometimes an interpreter has no […]

Today we celebrate the Three Kings, who followed the Star of Bethlehem to find the newborn Jesus and bear their gifts gold, […]